The initial Coronavirus Job Retention Scheme was announced by Chancellor Rishi Sunak on 20 March and closes to new entrants on 30 June 2020. Thereafter, it is restricted to employees who have been previously furloughed. Claims under the initial scheme cannot overlap 30 June. All claims from 1 July must be made for calendar months.

From 1 August, the level of support provided through the CJRS will start to be tapered, and the scheme is due to end on 31 October.

The initial scheme covers the period 1 March 2020 to the end of July.

From July to the end of October, it will be modified so that businesses will be able to bring furloughed employees back to work on a part time basis. The cost of wages and salaries will then be shared between their employers and the government. The employees will continue to receive up to 80% of their salary, up to £2,500.

The scheme operates in all regions and all sectors.

The current scheme – to 31 July

Under the current scheme, an employee is said to be furloughed under the CJRS if

Employers must confirm in writing to employees that they have been furloughed, in a manner consistent with employment law.

It appears from the Treasury Direction that the furlough period can be open ended provided that the period is at least three weeks. However, if the employer stated at the outset that the furlough period is to be a fixed period that came to an end on a certain date, and they then wanted to extend that period, the extension would need to be at least three weeks.

Employees who can be claimed for

No work may be carried out by employees on furlough, with the exception of study or training provided in order to improve the employee’s effectiveness in the employer’ business or the performance of the employer’s business. The training should not directly contribute to supplies made by the employer.

The original government announcement indicated that all those on the payroll on 28 February 2020 would be covered by the scheme. This is no longer sufficient in itself. To qualify, a person would also normally need to have received a payment of wages on or before 19 March., and such payment would need to be included on an RTI submission.

Company directors are subject to the same rules as other employees, in that they may be furloughed and required to do no work. There is, however, one slight relaxation in that directors are allowed to carry out work that they are required to do by an Act of Parliament in relation to such matters as filing accounts at Companies House, and in relation to running the payroll and making claims under the CJRS.

For each furloughed worker, the employer can claim:

This is subject always to the employer actually making a furlough payment equal to or more than the amount claimed for.

The amount that can be claimed is reduced with effect from 1 July 2020, as described in more detail below.

How is reference pay calculated?

The calculation of reference pay depends on whether the worker is a “fixed rate” employee or not.

A fixed rate employee is one who is entitled to a fixed salary in respect of their basic hours, as set out in their contract. The reference salary used is the amount payable in respect of the latest pay period ended on or before 19 March 2020. So for a monthly paid employee paid at the end of the calendar month, their reference pay would be their February 2020 salary.

For all other employees who started employment before 6 April 2019, the CJRS claim is the higher of:

For those who started work after 6 April 2019, the averaging calculation is based on their pay in the period from the date they started work up to the day before they were furloughed, or 5 April 2020 if this is earlier.

What is included in Regular Wages?

For the purpose of calculating “Regular Wages” above, the wages to be taken into account must exclude:

The original Treasury Direction referred to “non-discretionary overtime” but this has been deleted from the updated Direction.

Dividends are not covered by the CJRS.

Where the employee is furloughed during the pay period, the pension contribution needs to be apportioned between the pre and post furlough period, on a daily basis, for the purpose of calculating the grant.

The grant that can be claimed towards the employer pension contributions is the lower of the minimum level of contributions for an auto-enrolment pension, based on the furlough payment, and the amount actually paid by A Ltd.

The minimum level of auto-enrolment contributions is:

Deduct £520 (this is the Lower Level of Qualifying Earnings)

The total employer pension contribution made by A Ltd under the terms of the pension scheme is the gross pay to the employee of £2,125 multiplied by 3%, which equals £63.75.

As A Ltd can only claim the lower of the minimum level of contributions for an auto-enrolment pension (based on the furlough payment) and the amount actually paid into the employee’s pension, they can claim £35.40 to cover employer pension contributions.

The CJRS closes to new entrants on 30 June 2020. Employers will only be able to furlough employees who have already been furloughed for a full three week period at some time before 30 June 2020.

This means that the last date by which an employer can furlough an employee for the first time will be on 10 June, so that the they are furloughed for at least three weeks by 30 June.

The number of employees for which an employer can claim under the revised scheme cannot exceed the maximum number claimed for under the original scheme.

Costs Reimbursed under the Revised CJRS

From August 2020, the level of the grant will be tapered

In June and July, HMRC will pay 80% of wages up to a cap of £2,500 as well as employer National Insurance Contributions (ER NICS) and pension contributions for the hours the employee doesn’t work. Employers will have to pay employees for the hours they work under the flexible furlough scheme, which starts on 1 July.

In August, HMRC will pay 80% of wages up to a cap of £2,500 and employers will pay ER NICs and pension contributions for the hours the employee does not work.

Note: Employers may continue to top up the employee’s salaries above the CJRS limits.

The above is based on a table published by HMRC.

The CJRS grant will form part of the taxable profits of the employer for the purposes of corporation tax and business income tax. We are here to help you with all aspects of the JRS process. From analysis of employees to be furloughed to the formal claim process. Please speak to your normal MHA Moore and Smalley contact.

HMRC will check CJRS claims over the coming months and years. In the event that it is found that the CJRS grant was overclaimed, HMRC will issue an assessment equal to 100% of the sum overclaimed. Given that the initial grant will already have suffered corporation tax or income tax, this clawback will effectively impose an additional tax of 19% – 45% of the amount overclaimed (depending on the tax charged on the original claim).

Where HMRC considers that the overclaim results from deliberate error, penalties will be charged.

We are here to help you with all aspects of the JRS process. From analysis of employees to be furloughed to the formal claim process. Please speak to your normal MHA Moore and Smalley contact.

Small businesses to benefit from £20m of new grant funding 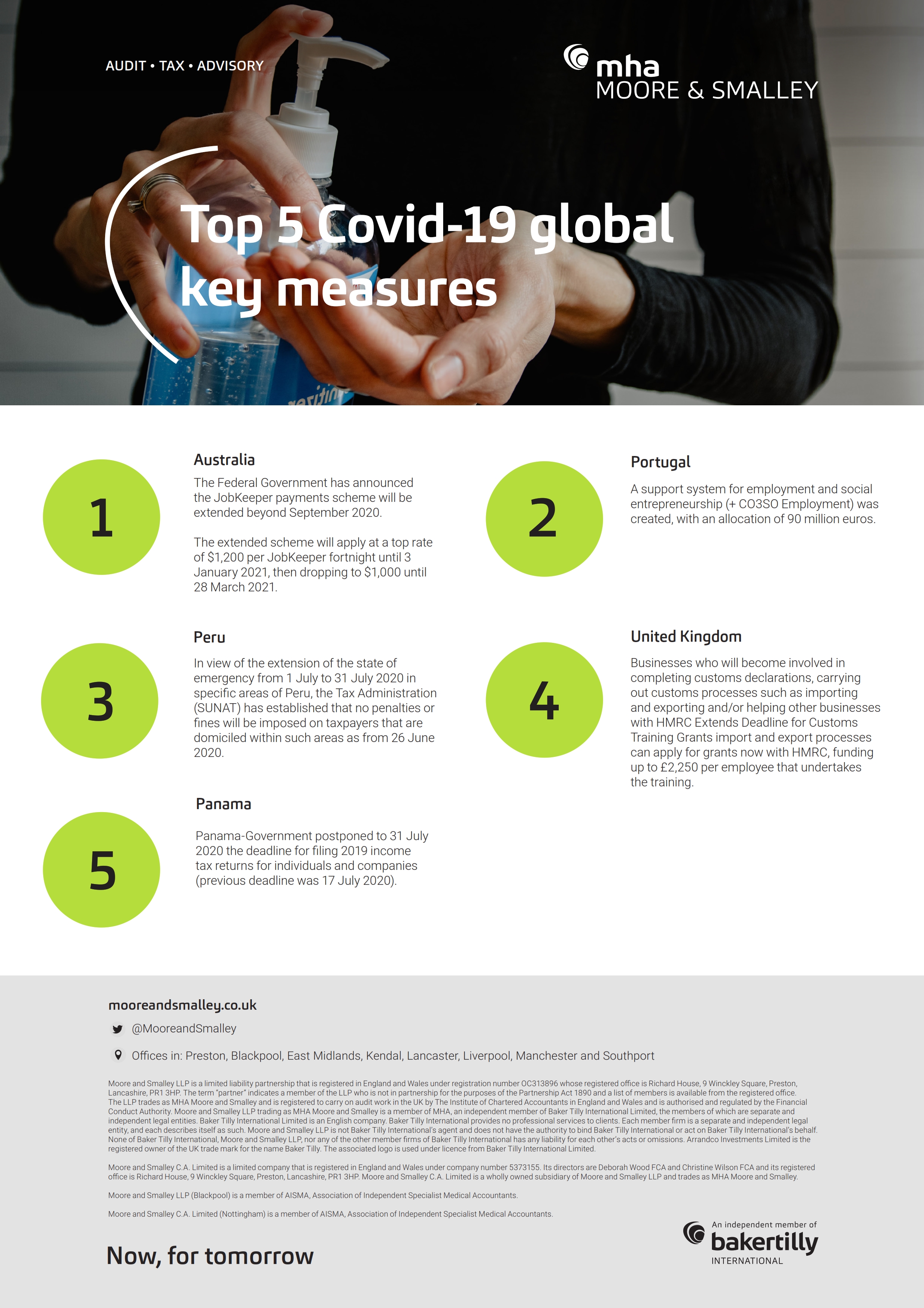 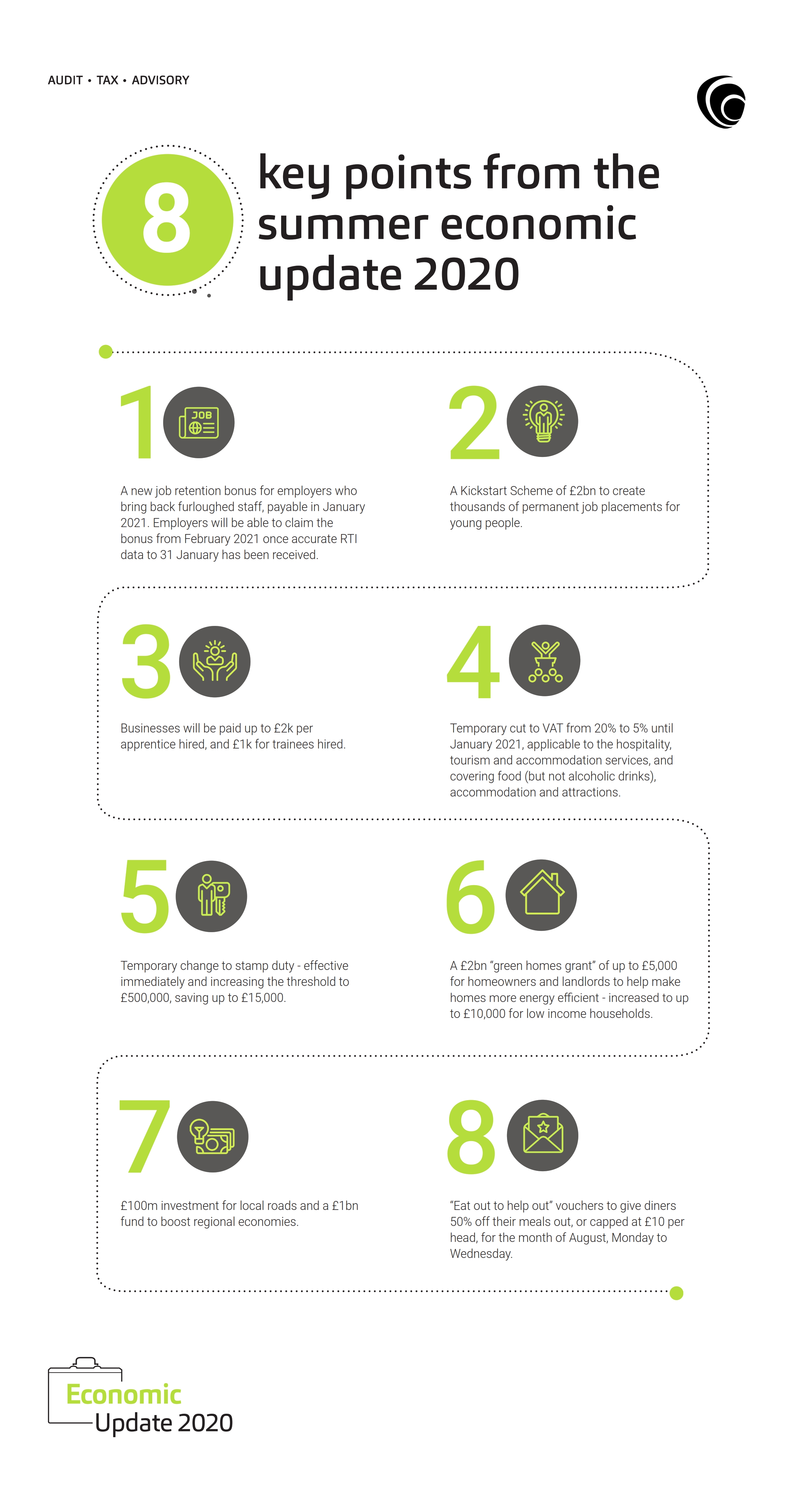